This is a dream.

I’ve been playing in a band called HomeBrew for 4 years. Technically, we’re a hobby band made up of medical personnel. A few doctors and medical assistants. I am not a medical person. We play vintage R&B, Swing and Rock. We are a 10 piece band with horns.

October of 2017, our band played for a medical fundraiser that was called, “Battle of the Doctor Bands.” Each band must have at least one doctor in it. There were three bands and 3 judges. The judges were radio personality, Dave Scott, pianist, Michael Allen Harrison, and the drummer for Steppenwolf, Ron Hurst

All the judges were very supportive of our band.  Michael Allen Harrison, though, made special reference to my original in our 4 song set, even quoting some of the lyrics in his feedback.

After the event, I went to thank the judges for coming and being supportive of local music. Michael made it a point to tell me that my song needed to be recorded and sent to all kinds of music publishing and record companies because as he stated to me, “It needs to be in a movie….even if you’re not performing it, it needs to be recorded.”

Since then I have contacted a long-time friend who has worked with top musicians from Everclear to Sheryl Crow, to be our sound engineer and producer.  He has agreed to help produce, “You’re So Much Fun,” which is an R&B/Pop, feel good love song.

If you wish to donate, here’s the GoFundMe link.

Thanks for your continued support.

Chris never fails to bring quality sound, original tunes, great covers, and positive energy to our guests at Rose City Food Park. His sound transcends generations and will have you smiling and moving your feet without even knowing it!

I have known Chris Taylor for many years and had the pleasure of hiring him to play live music at our clinic, to help us celebrate the 25th anniversary of our business.  We had never tried anything like that before and I was very pleased with how it went.  Chris was prompt, professional and sounded great.  He interacted with our patients and staff easily and the atmosphere he helped us create really enhanced our celebration.

I’ll be performing at the Third Annual Spring Sampling at Rose City Food Park, 5235 NE Sandy Blvd, in Portland this Saturday from 3:30-5pm.  The event runs from 12-5.  Drop on by and warm up to some great local flavors and brew of your choice.

I’ll be playing originals and covers.  If you purchase my album/CD “In Those Days,” at the event, all proceeds will go to the Paying It Forward Store.  Come sit a spell as I open things up beginning at 5pm.

I’m back at Rose City Food Park this Saturday afternoon from 3-4:30pm, as one of the featured musician’s for their Mini Brew Fest.   The weather for Saturday looks hot, which means, cold brews and live music wait for you.  I’ll be jamming cover tunes from Hall & Oates, America, Billy Joel, Elton John, Elvis and some of my own stuff.

Sit a spell and cool down this Saturday afternoon.

This Saturday afternoon I’ll be playing some of my originals along with cover tunes at the Rose City Food Park (5235 NE Sandy Blvd) from 2:30-4pm.  The weather looks great and so should the food.  Stop on by – I’d love to see you.

What can I say?

I’m deeply grateful for this incredible adventure I’ve been on with my wife, Barb Hughes, as we celebrate 29 years together on the 29th of April.  It just gets better and better.

I am totally Absorbed With You!!!

This Friday, February 3, for any purchase made on Bandcamp, they will donate 100% of their share of the proceeds to the American Civil Liberties Union, who are working to oppose last week’s Executive Order barring immigrants and refugees from seven Middle Eastern countries from entering the United States.

The picture I am holding in the photograph below is of my grandfather, who had dual citizenship. Born in Minnesota but raised in Denmark, he  came to live in America circa 1913. Was a WW1 Veteran and eventually settled in Clinton, Iowa owning a small grocery store.  I dedicated my 2012 album, “In Those Days,” in part, to my grandfather. 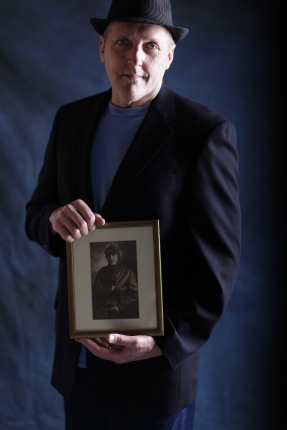 If you feel so led, please visit my bandcamp page  and review the music I have for sale.  I not only have “In Those Days” available, but some singles and instrumental music, as well.

Also, visit other artists and support them while supporting Bandcamp’s mission to help raise funds for immigrants and basic human rights.

Meet Barb Hughes of Portland, Oregon.  Music and communications has filled Barb’s life as a radio music director, on air talent to voice over artist. Barb is also a practical fashion and innovative ideas blogger.

One of Barb’s biggest passions is free clothes through swaps.

Barb’s smooth vocals and unconventional songwriting style is lyrically honest, and her song Fixin’ It showcases her unique genre.

I'm a singer/songwriter on themes of life, love, family and faith, as well as a professional emcee and background keyboard player. Chris Taylor Tunes showcases my songwriting, emcee, and live performance skills for business and personal celebrations and events. The Hughes/Taylor Company is my main squeeze, featuring audio production and specializing in voice overs, sound engineering, and creative media development.